Ladybugs: Are They Good Or Bad? 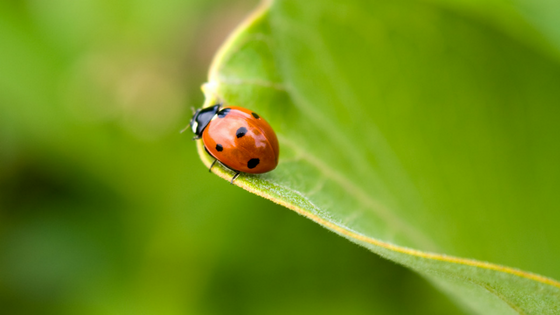 Long considered to be a symbol of good luck, ladybugs are one of the more popular insects. The superstition goes that if a ladybug lands on you, count its spots and you will know the number of months you will have good luck. In the garden, ladybugs are great natural pest control. There is some confusion, however, as to whether ladybugs are always good or bad. The main reason for this confusion is that there is a second species of beetle that looks very similar to the ladybug but isn’t quite as nice.

Easy on the Pocket Book

Using lady bugs for pest control is a cheap and easy way to control plant based pests.

The Asian Lady Beetle (harmonia axyridis) also has a reddish-orange shell with spots and is the same shape and size as a ladybug. The color of these look-alikes can range from a light tan to a red, and it can be almost impossible to tell them apart from ladybugs. The defining feature is that the Asian Lady Beetle has a white “M” or “W” marking below its head. Introduced by the U.S. Department of Agriculture (USDA) to help control aphids and scale, the Asian Lady Beetles have since spread to most parts of the country. While they do indeed feed upon these harmful insects, they have several detracting features. Much more aggressive than native ladybugs, the Asian Lady Beetle will bite and can be toxic to dogs. The insect will also invade homes during the winter months, and can leave behind a foul odor if disturbed, as well as a yellow fluid that can stain walls and surfaces. Some people may also have an allergic reaction to these insects, ranging from hay fever to conjunctivitis (“pink eye”) to hives. If you have an Asian Lady Beetle infestation give us a call and we can get it taken care of for you!

Ladybugs, also known as lady beetles or ladybird beetles, live outdoors and are completely harmless. Docile in nature, these insects are not aggressive and do not bite. Their red coloring is a warning symbol to birds and other predators that they are toxic to eat, but they pose no threat to humans. A single ladybug can consume up to 50 to 60 aphids in a day and may eat up to 5,000 of these pests in its lifetime. Besides aphids, ladybugs will eat a range of other soft-bodied insects, such as mealybugs, leafhoppers, and mites. Unlike the Asian Lady Beetle, native ladybugs do not overwinter in homes. Instead, they hibernate in leaf litter, tree bark, and other natural crevices.

How to Invite Ladybugs to Your Garden

While ladybugs can be purchased to release in your yard, some insect experts discourage the practice, as it can introduce parasites to your yard. As most ladybugs sold for release in the home garden are wild-caught, they may have parasites from that area. These parasites will then infect the native ladybugs in your yard. Unless you are willing to pay a bit more for ladybugs raised in an insect farm, it’s best to attract the helpful bugs to your yard naturally. Avoiding the use of pesticides is one step, as is providing plenty of pollen, which is another food source for adult ladybugs. It is also important to recognize ladybugs in each of their stages of development, from egg to larvae, to adult, as the immature insects may actually eat more aphids.